Today I’m thrilled to bring you this guest post by my friend and fellow author Amber Royer! 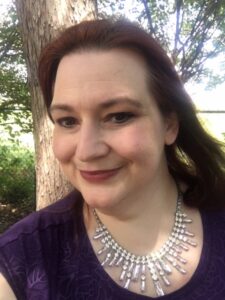 I love cozy mysteries.  An amateur sleuth solving crime against all odds.  A fun cast of characters.  Often a fun business, or a close-knit community.  Suspects, cops, sidekicks, pets, red herrings, conflicting goals . . .  there’s really a lot going on in something that feels like a light, fun read.  It can be a challenge to balance all of this and keep your protagonist at the center of things.

It all comes down to one concept: character agency.  This is a term borrowed from psychology.

According to psychologist Albert Bandura, “Agency refers to the human capability to influence one’s functioning and the course of events by one’s actions. There are four functions through which human agency is exercised. One such function is intentionality. People form intentions that include action plans and strategies for realizing them. The second function involves temporal extension of agency through forethought. People set themselves goals and foresee likely outcomes of prospective actions to guide and motivate their efforts anticipatorily. The third agentic function is self-reactiveness. Agents are not only planners and forethinkers. They are also self-regulators. The fourth agentic function is self-reflectiveness. People are not only agents, they are self-examiners of their own functioning. Through functional self-awareness, they reflect on their personal efficacy, the soundness of their thoughts and actions, the meaning of their pursuits, and make corrective adjustments if necessary.”

What does that mean?  As real-life human beings, we are happiest if our sense of agency in our lives is high.  We’re making our own decisions and plans, reflecting on how things worked out and revising things, in order to design the lives we want to live.  Take that away – or let us try our hardest and not feel like we’re getting anywhere – and we start getting cranky or depressed.

That’s why we want fictional characters to also have agency – especially a story’s protagonist.  We’re reading to experience a piece of someone else’s life – and we don’t want that slice to make us cranky.  Readers tend to lose patience with characters who let other people solve the big problems.  (This is different from having a narrator character telling the story of the protagonist, such as when Watson tells us an adventure starring Sherlock Holmes.  Watson was there, but he never claimed to be the star of the story.)

When I started this first Bean to Bar Mystery, I knew I wanted it to be Felicity’s story.  And I knew I wanted her to be a chocolate maker.  So when I designed her as a character, she needed to have the qualities that make a good sleuth – an inquisitive nature, the ability to solve puzzles and adaptability.  She’s a very specific person: she’s always been about following rules and controlling situations – but she starts to flourish once she steps outside her comfort zone.

But I brought characters into her life who had solving crimes and stopping bad guys in their official job description.  Arlo’s the cop investigating the case – and also Felicity’s ex-boyfriend from back in high school.  And Logan is a former bodyguard with a troubled past.  It would have been so easy to let Felicity take a back seat while these other characters did their jobs.  But that would have made for a disappointing read.  She’s the protagonist.  The last thing anyone wants is to see her on the sidelines while the boys sort things out.

When you want to give an amateur sleuth believable agency, there has to be some reason she’s the one in a better position to solve the crime than the other characters.  And you have to make sure she’s the one with the pieces to solve the crime before anyone else.  I did this in two ways: I had the murder victim be one of Felicity’s employees, which mean it was someone she knew more about than any of the other major characters.  And I had some of the clues come from people Felicity interacted with that the officials would have no reason to question.  No one else would have put everything together, because no one else had reason to be in all of the places Felicity was.  Her perspective allowed her to be the one to find the solution.

Character agency also means the character’s decisions shape the plot and have a lasting impact.  I gave Felicity plenty of room to do that.  Without the choices she makes, not only would the crime go unsolved, but other characters in the book would have maintained a different trajectory in their lives, especially her friends and potential love interests.  Expect this to amplify over the course of the series.

I hope you enjoy Felicity’s first adventure, Grand Openings Can Be Murder, available February 2.  Set on Galveston Island, she’s come home to start a bean to bar chocolate company – only to have her plans complicated when one of her employees is murdered at the shop’s grand opening party.  With an impending hurricane, she’ll have to rush to get the clues together before everyone evacuates. 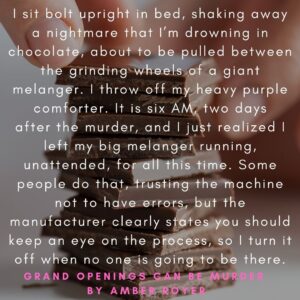