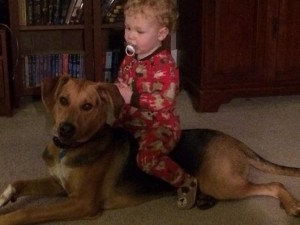 These two boys belong to my fabulous web designer, Liz. Liz says that shortly before her 15-year old dog went to the dog park in the sky, she got another hound puppy. They named him Copper after the Fox & the Hound. Copper was reported to be half hound dog and half Beagle and expected to be about 40 pounds when full grown… It seems that it’s more likely that he was half hound and half GREAT DANE, as he’s now 90 and still gaining.  Copper is great with kids, though he’s a unapologetic counter cruiser, jumps 4′ fences without much thought and thinks he’s a lap dog. What a big sweetie!

(Liz does fantastic websites and much more for authors.  If you are a writer wanting a good web person, check out her site at www.bemispromotions.com!)