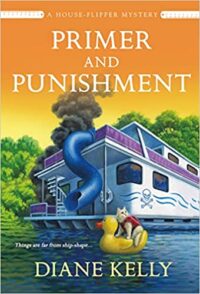 After remodeling a mid-century motel and a country church, carpenter Whitney Whitaker and her cousin Buck are looking once again to rehab and resell a house, only this particular house is made of fiberglass, floats, and has been dubbed the Skinny Dipper. The old houseboat sure could use some work—a new generator, a new motor, and especially a fresh coat of paint. But with a rooftop deck, a spiral slide, and an inflatable rubber duckie to ride on, the houseboat promises to be the perfect party barge. The unusual project has Whitney bubbling with excitement.

The charming and handsome Grant Hardisty lives on the cabin cruiser in the adjacent slip. At first, he seems like a fairytale prince just slightly past his prime and a little adrift. But the cousins soon learn he’s nothing more than a lazy leech who’s left a half dozen angry ex-wives in his wake and made enemies of all sorts of unsavory folks. The man is clearly caught in an increasingly dangerous current with no life preserver in sight.

Whitney and Buck are spraying primer on their houseboat when—KABOOM!—Grant’s boat blows sky high and the man becomes nothing more than chum for the lake’s fish to feed on. Detective Collin Flynn has no shortage of suspects, but the waters become muddied when several of them confess to the crime. Is one of those who confessed truly guilty, or are they taking a dive for someone else? Might the killer be one of the other suspects who seemed happy to see Grant sleeping with the fishes? When anonymous threats are made against the cousins, Whitney must quickly determine who killed their neighbor at the lake, or she and Buck might also be sunk.