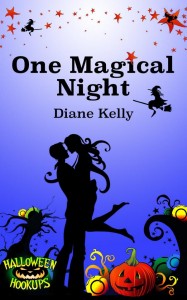 kindleibookskobonook
About the Book
Excerpt

The pothole appeared out of nowhere and—BAM!—the front tire of my 1998 Ford Econoline van hit the edge, going flat in an instant and giving off a whup-whup-whup as the van rolled to a stop on the edge of the street.

I banged a hand on the steering wheel. “Dammit!”

Despite having been a Girl Scout for five years as a young girl, I’d neglected their motto – Be prepared. I had no roadside assistance service to call. I had no can of Fix-a-Flat. And I had no jack—which didn’t really matter because even if I’d had a jack I had no spare tire to put on the van. The only thing I did have at the moment was a big problem. I was due to perform very soon at the McKinnon Manufacturing Company’s annual Fall Festival.

A glance at the GPS app on my phone told me I had a mile to go to reach the festival grounds. A glance at the time told me I had 20 minutes to get there. My mind quickly performed the math. While I might have been able to hoof the mile in the time remaining, there was no way I could do it while dragging my props with me. My suspension chairs. The saw and special frame used to cut an audience member in half. My trunk that contained my dancing cane, wand, and hoops.

Yep, you guessed it. I’m a magician. Or I still would be for the next hour or so. Unfortunately, while I could easily make a rabbit disappear, I could barely manage to conjure up enough cash each month to cover my basic bills. Savings or retirement funds? Investments? A house of my own? Forget it.

It wasn’t that I was a hack. People loved my show. It’s just that I’m no good at selling myself, finding gigs. I’d been busting my ass for five years—FIVE YEARS!—trying to make a go at this, but I averaged only one or two bookings a month. I’d need at least eight to make a decent living. Yep, I was a disillusioned illusionist.

If only I was truly magic and could whip up some business.

I climbed out of the van and into the crisp autumn air. Normally I wore a purple, sequin-trimmed genie outfit for my shows. But today, for my final performance, I’d opted to wear a witch costume, complete with a pointy black hat and flowing cape over a black unitard. The outfit seemed fitting for Halloween. I’d even crimped my dark hair, put green makeup on my face, and blacked out a couple of my teeth. For added fun, I’d fixed a fake wart on the end of my nose. Might as well go out with a bang, right?

Muttering curses, I wrangled the chairs from the back of my van and sat them on the street.

Screee! A red VW Beetle convertible braked to a quick stop next to me. A male clown in a bright blue suit and rainbow-colored wig sat behind the wheel. He turned my way, his red-painted mouth turning up in a smile. When he spoke, his voice was deep and resonant, the kind that could curl a girl’s toes and make her whimper. Totally unclownlike. “Looks like you could use some help, Ally.”

How did this sexy-voiced clown know my name? Oh, yeah, from the magnetic sign affixed to the side of my van.

Of course, thanks to that jarring pothole, the sign hung slightly askew now, exposing part of the logo underneath. POO-POO PATROL DIAPER SERVICE. I’d snagged the van for a song when the service went under. Not too many mothers using cloth diapers these days. Hard to worry about the environment when you’ve only had two hours sleep.

The clown cocked his head. “You headed to the McKinnon Fall Festival? I’d be happy to give you a ride.”

I squinted at him, as if narrowing my field of vision would somehow tell me whether this guy was a legitimate clown or some kind of perverted creep. “My parents warned me against getting into cars with strangers.”

He pointed upward. “The top’s down. You can jump out if I try anything sketchy.”

“True.” Though of course I’d risk a broken arm or leg jumping from a car. Still, I was 24-years old now, not a child, and I needed the $250 today’s gig would pay. I couldn’t risk losing the income and being late on my rent. Again. I picked up one of my prop chairs. “Any chance these chairs and my saw will fit in your car?”

He shrugged surprisingly broad shoulders. “Only one way to find out.”

He backed up, pulled over to the curb behind my van, and parked. When he climbed out of his car and stepped over, I noted that he was quite tall, six feet or so, with well-defined muscles even the goofy clown suit couldn’t fully disguise. He wore a pair of extra-large bright red Converse high-tops on his feet, along with yellow and white striped socks and a plastic daisy affixed to his chest. Though I couldn’t vouch for his nose given the red rubber ball he wore on the end of his schnoz, the rest of his facial features seemed to be proportional. His blue clown suit even brought out the color is his ocean-blue eyes. I couldn’t help but wonder what this guy would look like in normal attire and without the makeup. Too bad my wand wasn’t really magic or I’d wave it over him for a quick look-see.

Guff Aws? I simultaneously groaned and laughed as I shook his hand.

He raised a blue brow. “My name is no worse than Ally Kazam.”

I offered him a smile. “Touché.”

He leaned in conspiratorially. “Our names are nothing compared to this clown I saw at a convention once. She had a couple of forty-four double D’s and a girlish giggle and called herself ‘Titters.’”

I rolled my eyes. “Sheesh.”

“She incorporated a striptease into her act. Bachelor and frat parties were her specialty. Niche markets. A smart move on her part.”

What did it say about me that I had less business sense than a clown stripper named Titters? If I hadn’t felt bad before, I sure as heck did now.

Together, Guff and I somehow managed to load all of my things into his small car, though it was a tight squeeze to get the saw table in. How a dozen clowns could fit into a vehicle this tiny I’d never know.

When we finished, he gestured to my disabled vehicle. “We better get your van off the road or the police will have it towed. Hop in and put it in neutral. I’ll give you a push.”

I gave him another smile. “Maybe you should trade in your rainbow wig and clown suit for a superhero cape and tights.”

“Me in tights?” His lips turned up in a grin. “I’ll have to save that for another time. The Fall Festival is supposed to be a family-friendly event, not the review at Chippendales.” He crooked his arms behind his head and improvised some surprisingly rhythmic undulations.

I shook my head. “You’re a naughty clown, Guff.”