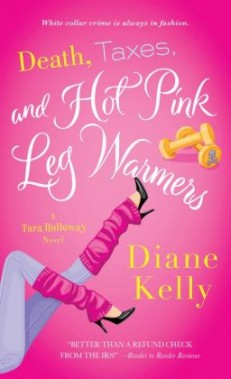 amazonkindleaudiblebnnookkoboindieboundpowellsst_martins_pressibookswalmarttargetbooks_a_milliongoogle
About the Book
Excerpt
Reviews

Nothing like taking a baseball bat to the head to ruin a girl’s faith in herself.

Yep, I’d recently let my guard down, assumed a mild-mannered granny posed no threat to me. Unfortunately, when I informed the woman she’d violated federal law by unwittingly helping terrorists funnel money overseas, she’d panicked. Even more unfortunately, an official Major League Baseball bat signed by none other than Texas Ranger Josh Hamilton had been in close reach behind the counter of her pawn shop. She’d grabbed the bat, swung for the seats, and crack! Lights out for me.

My confidence had been shattered along with my skull, but I was trying hard to be positive. At least my injuries hadn’t been bad enough to require a steel plate in my head. Then again, with metal covering my brain, aliens from outer space wouldn’t be able to read my thoughts or exercise mind control. A steel plate could also come in handy if I ever needed to head butt someone.

Oh, well. I’d count my blessings nonetheless. I was lucky she’d only struck me once and that I’d survived the ordeal. Looked like all those times people had called me hard headed hadn’t been solely a comment on my stubborn personality.

How’s that for looking on the bright side?

On another very positive note, after weeks of yearning on my part, Nick Pratt and I were finally free to explore our mutual attraction and take our relationship for a test drive.

Nick was my coworker at the IRS, a senior special agent, and my partner in the big investigation on which we were preparing to embark. As far as I was concerned, he was also the reason why the sun rose in the morning and the stars twinkled at night, not to mention the reason why I continued to shave my legs even though it was now early November and my pasty calves wouldn’t see the light of day until spring hit Dallas four months from now.

With any luck, my freshly shaved legs would soon find themselves wrapped around Nick’s firm backside. His kisses were hotter than a Texas summer, so I could only imagine how steamy sex with Nick would be. I couldn’t wait to find out!

While I’d been in the hospital recovering from my head injuries, Nick had approached my then-boyfriend Brett and asked him to step aside, at least temporarily, so Nick and I could determine whether we’d be a better match. Brett had agreed, admitting to me that he’d been attracted to a female chef at a country club in Atlanta where he’d been working on a landscaping project. Looked like the saucy chef had not only stirred up some delicious dishes, but she’d stirred up some feelings in Brett as well.

Though Brett and I hadn’t yet been certain whether each other was the one, we had a pretty good thing going and didn’t want to recklessly throw what we had away. We’d left the door open for a reconciliation if our new relationships didn’t work out. If either of us wanted to get back together, that person would go at noon on the Saturday after Thanksgiving to the Arboretum in Dallas, the place where we’d first met. If we both showed up, we’d reconcile, no questions asked. If neither of us showed, we’d move on. If only one of us turned up, well, I suppose that person would feel like an idiot, huh?

We’d agreed to a couple other stipulations, too. First, there would be no communication between the two of us during the trial break-up period. If we were going to take a chance with other people, it needed to be a real chance without the complications that would inevitably result from maintaining contact. Second, neither of us could engage in full-fledged nooky with the new love interest. Reconciliation would be impossible if either of us crossed that critical line.

Nick hadn’t liked the restrictions imposed on us, especially the no-nooky clause, but he’d acquiesced, certain once I’d had a taste of his charms he’d ruin me for all other men. He’d maintained his membership with the Big D Dating Service, though, as a subtle reminder to me that if our trial run didn’t work out he, too, was poised to jump right back into the dating pool with both feet.

It was less than the ideal way to start a relationship, but we’d all been around the block a few times and knew pairing off at our ages was no longer a matter of simply looking for a good time. It was about finding the most suitable partner. At twenty-seven, my biological clock had begun to tick, though the tick was still slow and faint. I was in no immediate rush, but I didn’t have years to dawdle, either.

“Here we are.” Nick pulled the white government sedan, what we agents referred to as a G-ride, into the parking lot of the Dallas Police Department headquarters on south Lamar Street.

Nick was built like a slightly scaled-down version of Dwayne “The Rock” Johnson and had eyes the same amber color as Johnnie Walker Black Label scotch. Like the scotch, Nick had been aged to perfection, with smooth, rich flavors and complex character. He could also be just as habit forming. I wasn’t sure yet whether indulging in too much Nick would leave me with a headache and dry heaves the next day, but I was willing to find out.

Nick cupped his hands behind his head and undulated in his seat. “Bow chicka bow-wow.”

I rolled my eyes. Truth be told, though, even when Nick was acting goofy he was sexy as hell. And I had to admit that, while I preferred Nick clean shaven and less pornified, the facial hair went a long way in disguising him. I’d had my stylist dye my usual chestnut hair a raven color and give me a spiral perm. Having a new look was fun, though learning how to care for the curls had been a challenge. I’d finally realized the best thing to do was leave them alone and let them do their thing.

Disguises could be difficult, but they were necessary. Between Nick and me, we’d put away quite a few bad guys. If there were only six degrees of separation between everyone and Kevin Bacon, it was even more likely someone we’d run into before could resurface at the strip club we planned to investigate. The last thing Nick or I needed was for some target we’d arrested in an earlier case to recognize us.

As I gathered up my purse and briefcase, Nick reached over and tugged on the end of a curl near my ear, stretching the hair out straight, releasing it, and grinning as it sprung back into place. “Boing.”

“Hey!” I patted the curl back into place. “No messing with my hair.”

What a liar. I loved it when Nick touched me and he knew it. I only wished my belief in myself could spring back as easily as my curl had. If our new case went well, though, maybe I’d regain the confidence that had been knocked out of me by that damn baseball bat.

“The curls are cute.” He slid me a sly look. “I can think of some ways to really make them bounce.”

My nether regions clenched at his suggestion. “Don’t tempt me.”

He leaned toward me, putting a finger under my chin and lifting my face until it was mere inches from his. “If I can’t tempt you,” he said softly, his breath like a feather across my lips, “can I at least kiss you?”