Dead as a Door Knocker 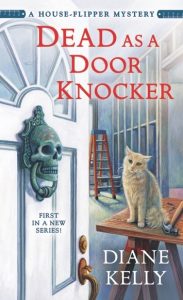 kindleibookskobonookgoogleamazonbnaudibleamazon_audio
About the Book
Excerpt

I grabbed my purse, my tool belt, and the bright yellow hardhat I’d adorned with a chain of daisy decals. I gave my cat a kiss on the head. “Bye-bye, Sawdust.” Looking into his baby blue eyes, I pointed a finger at him. “Be a good boy while mommy’s at work, okay?”

The cat swiped at my finger with a paw the color of pine shavings. Given that my eyes and hair were the same shade as his, I could be taken for his mother if not for the fact that we were entirely different species. I’d adopted the furry runt after his mother, a stray, had given birth to him and two siblings in my uncle’s barn. My cousins, Buck and Owen, had taken in the other two kittens, and my aunt and uncle gave the wayward mama cat a comfy home in their hilltop cabin on the Kentucky border.

After stepping outside, I turned around to lock the French doors that served as the entrance to my humble home. The place sat in my parents’ backyard, on the far side of their kidney-shaped pool. In its former life, it had served as a combination pool house and garden shed. With the help of the contractors I’d befriended on my jobs, I’d converted the structure into a cozy guest house—the guest being yours truly. It had already been outfitted with a small three-quarter bath, so all we’d had to do was add a closet and kitchenette.

Furnishing a hundred and fifty square feet had been easy. There was room for only the bare essentials—a couple of bar stools at the kitchen counter, a twin bed and dresser, and a recliner that served as both a comfortable reading chair and a scratching post for Sawdust. Heaven forbid my sweet-but-spoiled cat sharpen his claws on the sisal post I’d bought him at the pet supply store. At least he enjoyed his carpet-covered cat tree. I’d positioned it by one of the windows that flanked the French doors. He passed his days on the highest perch, watching birds flitter about the birdhouses and feeders situated about the backyard.

At twenty-eight, I probably should’ve ventured farther from my parents’ home by now. But the arrangement suited me and my parents just fine. They were constantly jetting off to Paris or Rome or some exotic locale I couldn’t pronounce or find on a map if my life depended on it. Living here allowed me to keep an eye on their house and dog while they traveled, but the fact that we shared no walls gave us all some privacy. The arrangement also allowed me to sock away quite a bit of my earnings in savings. Soon, I’d be able to buy a house of my own. Not here in the Green Hills neighborhood, where real estate garnered a pretty penny. But maybe in one of the more affordable Nashville suburbs. While many young girls dreamed of beaded wedding gowns or palomino ponies, I’d dreamed of custom cabinets and and built-in bookshelves.

After locking the door, I turned to find my mother and her black-and-white Boston terrier, Yin-Yang, puttering around the backyard. Like me, Mom was blond, though she now needed the help of her hairdresser to keep the stray grays at bay. Like Yin-Yang, Mom was petite, standing only five feet three inches. Mom was still in her pink bathrobe, a steaming mug of coffee in her hand. While she helped with billing at my dad’s otolaryngology practice, she normally went in late and left early. Her part-time schedule allowed her to avoid traffic, gave her time take care of things around the house and spend time with her precious pooch.

My mother returned the sentiment, while Yin-Yang raised her two-tone head and replied with a cheerful Arf-arf! The bark scared off a trio of finches who’d been indulging in a breakfast of assorted seeds at a nearby feeder.

Mom stepped over, the dog trotting along with her, staring up at me with its adorable little bug eyes. “You’re off early,” Mom said, a hint of question in her voice.

No sense telling her I was on my way to an eviction. She already thought my job was beneath me. She assumed working as a property manager involved constantly dealing with deadbeats and clogged toilets. Truth be told, much of my job did involve delinquent tenants or backed-up plumbing. But there was much more to it than that. Helping landlords turn rundown real estate into attractive residences, helping hopeful tenants locate the perfect place for their particular needs, making sure everything ran smoothly for everyone involved. I considered myself to be in the homemaking business. But rather than try, for the umpteenth time, to explain myself, I simply said, “I’ve got a busy day.”

Mom tilted her head. “Too busy to study for your real estate exam?”

I fought the urge to groan. As irritating as my mother could be, she only wanted the best for me. Problem was, we didn’t agree on what the best was. Instead of starting an argument I said, “Don’t worry. The test isn’t for another couple of weeks. I’ve still got plenty of time.”

“Okay,” she acquiesced, the two syllables soaked in skepticism. “Have a good day, sweetie.” At least those five words sounded sincere.

I made my way to the picket fence that enclosed the backyard and let myself out of the gate and onto the driveway. After tossing my hard hat and tool belt into the passenger seat of my red Honda CR-V, I swapped out the magnetic WHITAKER WOODWORKING sign on the door for one that read HOME & HEARTH REALTY. Yep, I wore two hats. The hard hat when moonlighting as a carpenter for my uncle, and a metaphorical second hat when working my day job as a property manager for a real estate business. This morning, I sported the metaphorical hat as I headed up Hillsboro Pike into Nashville. Fifteen minutes later, I turned onto Sweetbriar Avenue. In the driveway of the house on the corner sat a shiny midnight blue Infiniti Q70L sedan with vanity plates that read TGENTRY. My shackles rose at the sight.

Thaddeus Gentry III owned Gentry Real Estate Development, Inc. or, as I called it, GREED Incorporated. Okay, so I’d added an extra E to make the spelling work. Still, it was true. The guy was as money-hungry and ruthless as they come. He was singlehandedly responsible for the gentrification of several old Nashville neighborhoods. While gentrification wasn’t necessarily a bad thing—after all it rid the city of ramshackle houses in dire need of repairs—Thad Gentry took advantage of homeowners, offering them pennies on the dollar, knowing they couldn’t afford the increase in property taxes that would result as their modest neighborhoods transformed into upscale communities. He’d harass holdouts by reporting any city code violations, no matter how minor. He also formed homeowners’ associations in the newly renovated neighborhoods, and ensured the HOA put pressure on the remaining original residents to bring their houses up to snuff. These unfortunate folks found they no longer felt at home and usually gave in and moved on . . . to where, who knows?

When I’d come by a week ago in a final attempt to collect from the tenants, I’d noticed a for sale sign in the yard where Thad Gentry’s car was parked. The sign was gone now. Had Gentry bought the property? Had he set his sights on the neighborhood?