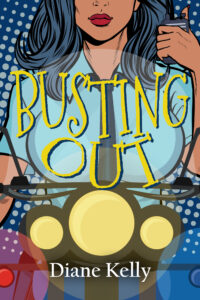 amazonkindleaudiblenookkoboibookssmashwords
About the Book
Excerpt

Buxom motorcycle cop Chastity “Cha-Cha” Rinaldi has a tough reputation to live up to. On her first day as a rookie for the Mobile, Alabama police department, Cha-Cha pulled over a pickup hauling a trailer with a busted taillight, and unwittingly stumbled upon an international human smuggling ring. But now, the three creeps she put behind bars have busted out of prison. Have they fled the country, or could they be coming for her as they’d vowed upon receiving their life sentences?

A traffic stop puts Cha-Cha face-to-face with high school physics teacher Newton Isaac. Cha-Cha can’t imagine herself with the geeky yet undeniably appealing guy. After all, he’s her polar opposite. Still, he’s a welcome distraction from her woes, and she finds herself inexplicably drawn to him, as if by some unseen super-magnetic force pulling on her underwire bra.

Is Cha-Cha destined to pose a one-woman defense against three violent brutes, or might Newt prove to be her nerd in shining armor?