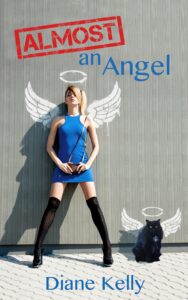 amazonkindle
About the Book
Excerpt

At 6:30 on a Friday morning in late September, I stood butt naked before the bathroom mirror in my outrageously priced Manhattan brownstone apartment. Turning my face first one way, then the other, I examined my dull, rough skin. Definitely time to exfoliate. I needed to look my best today. I had a meeting this morning that could make or break my career. Thank goodness I had a battery-powered skin buffer. With my demanding work schedule, there was no time to visit a salon for a professional facial. I could barely find time to get my hair cut and colored these days. My mousy-brown roots were already beginning to show again, as if the real me were trying to overtake the sophisticated and self-assured image I’d worked so hard to create.

I bent down and rummaged through my cabinet, locating the device behind a stack of toilet paper. Buffer in hand, I stood, leaned toward the mirror, and put the brush to my face. But when I flipped on the switch—click—nothing happened. “What the—?” I turned the device off and back on again. Click-click. Still nothing. “Ugh!”

After sliding open the battery compartment in the handle, I removed the double A’s and went in search of replacement batteries. My search of the kitchen junk drawer yielded only a single 9-volt and a couple of D cells. Ugh, again. I’d have to borrow batteries from another device. But what?

My eyes scanned my apartment. My blender, used primarily to concoct frozen margaritas, had a cord. Ditto for the toaster and coffee maker. None of them used batteries. I didn’t own a radio or a flashlight. My cell phone had apps to fulfill those needs. I looked up in thought. Bingo! The carbon monoxide detector mounted on the ceiling used double A’s, didn’t it? And it’s not like I really needed the device. The only people who died of carbon monoxide poisoning were hillbillies who heated their shacks with propane barbecue grills.

I retrieved one of the chairs from my bistro set and pulled it over, situating it under the device. Stepping onto the chair, I reached up, twisted the plastic cover open, and finagled the batteries out of the detector, clutching them in one hand as I climbed down and returned to the bathroom.

An hour later, I’d exfoliated, showered, shampooed, applied my makeup, slid into a suit, and accessorized. Phew!I pulled my honey-blond hair back into a tight twist, securing it with a fashionable tortoiseshell clip. While I could pull off this look now, I would have never been able to wear this sleek style pre-nose job. My parents had paid for the cosmetic surgery when I’d been in my teens. In fact, despite my fears, my mother insisted I undergo what she called a “corrective procedure.” No daughter of hers was going to walk around looking like an aardvark!

It had taken years of trial and error, but I’d finally achieved a look that was the perfect blend of styles. Businesslike enough for my job on Wall Street, feminine and fashionable enough to take me into New York’s after-hours bar scene, and classy enough to appease, if not completely satisfy, my impossible-to-please mother. Would I ever be enough for her?

I took the stairs down two flights to the first floor, pushed opened the glass door, and walked out onto the front steps of my building.

There he was, the bedraggled black cat that had been hanging around near the trash cans in front of my building for the past few days. Does he belong to someone? It seemed unlikely given his skinny, scruffy condition. I’d wanted a kitten as a young girl, but my mother wouldn’t allow it. Litterboxes are filthy and disgusting, she’d said. Besides, I didn’t spend three months searching for the ideal armchairs only to have a cat shred them. I’d offered to keep the pet in my bedroom, but she wouldn’t budge. My appeals to my father fell on deaf ears. It’s up to your mother, he’d said. Nobody could ever accuse me of being a daddy’s girl. He had a closer relationship with his golf clubs than his daughter. Eventually, I’d given up trying to persuade them and settled for playing with pets at the homes of my friends.

As I descended the stairs, the cat tentatively padded forward, his golden eyes locked on me. Meow?

His mews sounded like questions. Probably he was asking if he could go inside and shed all over my two-thousand-dollar white sofa. Not on your life, buddy. The thought was immediately followed by another. Yikes! I’m starting to sound like my mother.

As he took a step closer and mewed again, I felt a twinge in my heart. The cat’s fur was patchy and his ribs were visible. But surely someone else would take him in, right? Besides, I had no litter box, and no time to make a trip to the store before heading to work. I couldn’t be his guardian angel, at least not at the moment, but I wasn’t totally heartless. If he was still out here tonight, I’d feed him the leftover salmon sitting in my fridge.

I bent down and gave him a scratch under the chin. “Dinner’s on me if nobody takes you in today. Okay?”

As I stood and turned to head for the subway, the cat made one last plea. Meow?

I made my way down the sidewalk and into the bowels of New York City. Luck was with me. With a rush of warm air, a train whooshed into the station. No waiting this morning. While riding a noisy train with huddled masses yearning to be free was not much fun, cabs cost a small fortune. I’d rather sock those funds away in my 401(k). My goal was to be worth half a mil by age thirty.

Like everyone else on the train, I ignored my fellow passengers and stared down at the screen of my cell phone as we were jostled about. I was immersed in a fantastic romance in which a long-ago prince was catapulted forward in time astride a magical horse to meet his true love, a modern-day horse trainer. An incredible story, sure, but who doesn’t need an escape now and then?

A half hour later, the prince was unsuccessfully attempting to woo the trainer, who seemed far more interested in the steed than its royal rider, when the train pulled into my stop. I slid my phone into my purse and emerged from the subway a block from my office building. On my way, I ducked into my favorite coffee shop. The barista was an attractive, dark-haired guy who, like me, was in his late twenties. He looked up from his place behind the counter and flashed a smile as bright as a spotlight shining down on a stage.

What’s his name? Mike? Martin? Matt? He’d told me once, but I couldn’t remember and he didn’t wear a name tag. As cute and sweet as he might be, I ignored the flicker of interest he stirred in me. I’d set my sights higher, on a man who earned a good living and could hold his own at parties on Park Avenue, not a coffee-schlepping Broadway wannabe who survived on tips. Still, engaging in a little flirtation was harmless, wasn’t it? Especially when the barista would throw in an extra shot of espresso for free.

Mike, Martin, or Matt performed a soft-shoe step as he made his way toward me. I had to admit the guy had a spark, an optimistic, though perhaps naïve, energy. He dared to pursue his dreams despite the sacrifices he had to make and the odds being stacked against him. A part of me admired him for that. Another part thought he should pull his head out of the clouds. And yet another part of me wondered if I might be missing out by not giving the guy a chance. Heck, he could be the next big star, win a trophy case full of Tony awards. Who knows? None of us knew for certain what life had in store for us.

“Good mornin’, Sidney,” he greeted me over the counter. “Your usual skinny vanilla latte? Extra shot on the house?”

I tilted my head in that coy way I’d practiced in front of the mirror. “You know me so well.”

He put his hands on the counter and leaned toward me. “I’d like to know you better.”

I put him off as I always did, with words designed to both keep him at bay and lead him on. If he lost all hope, those free extra shots would dry up for sure. “I’m involved with someone right now.” I looked at him through my heavily made-up lashes, blinking slowly, sensually, letting my lips curl up in a sly grin. “But you never know what might happen . . .”

He returned the grin and tossed an extra shot into my cup. Yes! He handed me the cup, along with a small white bag, apparently upping the ante. “Something sweet for a sweetie.”

I fought the urge to snort. Nobody had called me sweet since I was a kid. Smart, sure. Driven, oh yeah. Even bitchy, which, frankly, I took as a compliment. Bitches didn’t take crap and they got stuff done. But I’d accept his flattery and be on my way.

“Thanks.” I turned to go, tossing him a last, longing look over my shoulder for good measure. “Always great waking up to you.” Was that statement full of innuendo or what? Sometimes I just couldn’t help myself. Besides, like the latte, seeing his smile one last time made me feel warm inside.